Here’s what Dr. Jen had to say about Kingsley:

I first laid eyes on this extremely bedraggled, massively matted and underweight intact male on January 28th, 2022 when his rescuer brought him in for evaluation. Olivia had taken it upon herself to house him indoors for the past few months as she could clearly see life wasn’t treating him well, but as time rolled on, his overall condition deteriorated, and she knew he had big issues that needed addressing. At that time, it was evident how much she cared for the approximately six year old, scraggily yet extremely sweet guy, but his needs were far more than she could see to long-term, so I offered to take him in to our program and tend to all of his medical problems. After about 2 weeks of emailing back and forth, we collectively decided it would be best if I took over his care; although it was difficult to say goodbye I am proud of her for making a decision that was in his best interest.

I discovered, as I suspected, that I had my work cut out for me, as the reason he was so incredibly dirty and tangled was because his poor mouth was horribly infected and inflamed, quelling any desire (or ability) to groom himself. When I took him to surgery on February 9th, I had to not only shear him like a sheep, but I had to extract all of his teeth with the exception of his canines, perform a middle ear flush as his ears had been chronically infected, and of course perform that long-overdue neuter. By the next morning his persistent, smelly drool had all but disappeared even though the insides of his mouth looked like raw hamburger, and he was lapping up canned food with eagerness. Deworming for internal parasites, antibiotics and narcotics completed the treatments he needed at that time, so after a few days of R and R, I happily sent him out to our sanctuary; big surprise (not) that he was FIV+. Years of being beaten up and down had taken its toll on the poor fella.

Kingsley, as I named him for his lion-like appearance, has thoroughly enjoyed his new surroundings from the get-go. By nature he is a bit on the reserved and shy side, but likes to hang out with a couple of the other quieter cats and has no problems getting along with any of the other residents. He has no issues with anything or anyone– except his mouth; the painful condition known as stomatitis that is all too common on FIV kitties has proven to be quite detrimental to him since his arrival. In fact, he has made repeat trips to the office for further care, and he was hospitalized for a lymph node abscess that stemmed not from a cat bite, but from the nasty bacterial population inhabiting his mouth for so long. I am doing my darndest to keep his oral inflammation at bay, but I fear that given the chronicity of his unfortunate situation, years of neglect, and the lack of any sort of treatment prior to his arrival has pointed us on a course that will require long-term care. Steroids, antibiotics and Lysine supplementation for underlying herpes viral conjunctivitis thus far are helping to control his symptoms, and I am hopeful that no further unexpected complications pop up now that those bad teeth are gone.

Adoption will eventually most likely be an option for handsome, gentle Kingsley, but first I have to make sure that I can keep him comfortable for the long-haul. This will give him time to further evolve into the confident cat I know he possesses within himself, he just needs time to come into his own. He is a gentle, kind soul who had a heap of crap dumped on him that no one deserves. We are making it our mission to dote on our resident royalty so that he wants for nothing, and has every creature comfort made available to him.

Can’t adopt, but still want to help? Find out how you can sponsor a cat! 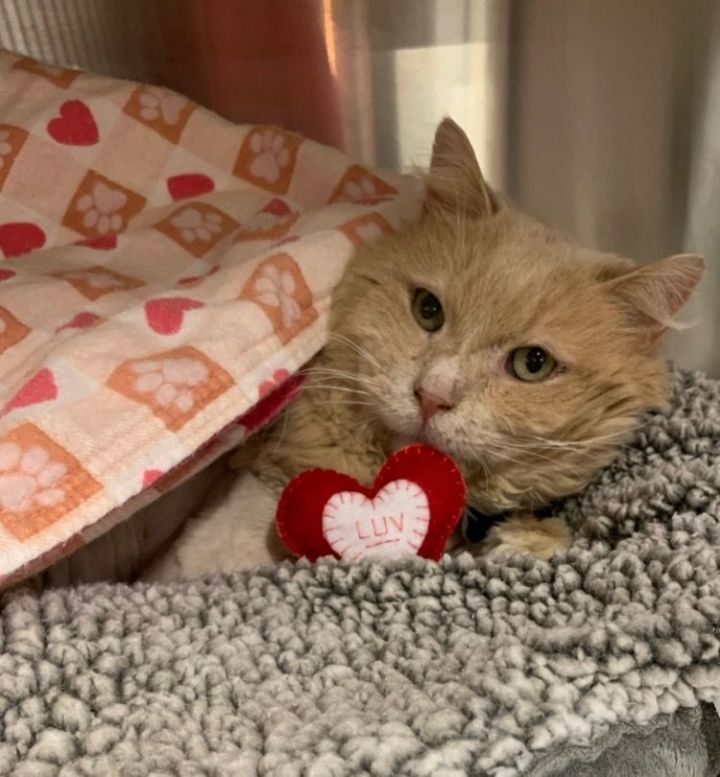